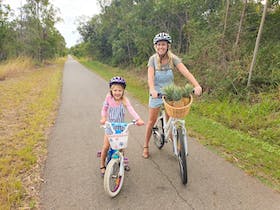 A popular track for walker, joggers, cyclists and families, the Capricorn Coast Pineapple Rail Trail takes visitors through picturesque bushlands and urban landscape. A recreational attraction and pedestrian/cycleway link, the asphalt path stretches four and a half kilometres from the Yeppoon town centre through bushland to the golf course and Club Estate.

The railway line was constructed in 1909 and originally stretched 53 kilometres between Yeppoon and Rockhampton. The track was closed down in 2006 when it’s main loading of pineapples moved to road transport. The new Capricorn Coast Pineapple Rail Trail was opened in 2014.